The Australia government has said it will adopt a mandatory code to require tech giants such as Google and Facebook to pay local media for reusing their content. The requirement for them to share ad revenue with domestic publishers was reported earlier by Reuters.

Treasurer Josh Frydenberg published an opinion article in The Australian Friday, writing that an earlier plan to create a voluntary code by November this year to govern the relationship between digital platforms and media businesses — in order to “protect consumers, improve transparency and address the power imbalance between the parties” — had failed owing to “insufficient progress.”

“On the fundamental issue of payment for content, which the code was seeking to resolve, there was no meaningful progress and, in the words of the ACCC [Australia’s competition commission], ‘no expectation of any even being made,’ ” he wrote.

The ACCC has been tasked with devising the code, which Frydenberg said will include provisions related to value exchange and revenue sharing; transparency of ranking algorithms; access to user data; presentation of news content; and penalties and sanctions for non-compliance.

“The intention is to have a draft code of conduct released for comment by the end of July and legislated shortly thereafter,” he added. “It is only fair that the search engines and social media giants pay for the original news content that they use to drive traffic to their sites.”

As the technology of the digital platforms has evolved, so too has their market dominance.

By creating a mandatory code, we’re seeking to be the first country in the world that successfully requires these social media giants to pay for original news content. pic.twitter.com/vhMaQab2E4

The debate around compensation for tech giants’ reuse of (and indirect monetization of) others’ editorial content — by displaying snippets of news stories on their platforms and aggregation services — is not a new one, though the coronavirus crisis has likely dialed up publisher pressure on policymakers as advertiser marketing budgets nose-dive globally and media companies stare down the barrel of a revenue crunch.

Earlier this month France’s competition watchdog ordered Google to negotiate in good faith with local media firms to pay for reusing their content.

The move followed a national law last year to transpose a pan-EU copyright reform that’s intended to extend rights to news snippets. However, instead of paying French publishers for reusing their content, Google stopped displaying content that’s covered by the law in local search and Google News.

France’s competition watchdog said it believes the unilateral move constitutes an abuse of a dominant market position — taking the step of applying an interim order to force Google to the negotiating table while it continues to investigate.

Frydenberg’s article references the French move, as well as pointing back to a 2014 attempt by Spain, which also created legislation seeking to make Google to pay for snippets of news reused in its News aggregator product. In the latter case Google simply pulled the plug on its News service in the market — which it remains closed in Spain to this day… 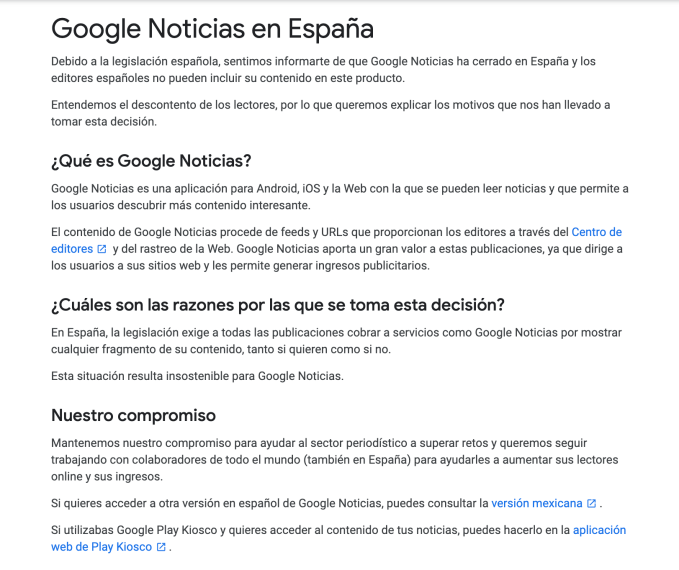 “We are under no illusions as to the difficulty and complexity of implementing a mandatory code to govern the relationship between the digital platforms and the news media businesses. However, there is a need to take this issue head-on,” Frydenberg goes on. “We are not seeking to protect traditional media companies from the rigour of competition or technological disruption.

“Rather, to create a level playing field where market power is not misused, companies get a fair go and there is appropriate compensation for the production of original news content.”

Reached for comment on the Australian government’s plan, a Google spokesperson sent us this statement:

We’ve worked for many years to be a collaborative partner to the news industry, helping them grow their businesses through ads and subscription services and increase audiences by driving valuable traffic. Since February, we have engaged with more than 25 Australian publishers to get their input on a voluntary code and worked to the timetable and process set out by the ACCC. We have sought to work constructively with industry, the ACCC and Government to develop a Code of Conduct, and we will continue to do so in the revised process set out by the Government today.

Google continues to argue that it provides ample value to news publishers by directing traffic to their websites, where they can monetize it via ads and/or subscription conversions, saying that in 2018 alone it sent in excess of 2 billion clicks to Australian news publishers from Australian users.

It also points out publishers can choose whether or not they wish their content to appear in Google search results. Though, in France, it’s worth noting the competition watchdog took the view that Google declaring that it won’t pay to display any news could put some publishers at a disadvantage versus others.

The dominance of Google’s search engine certainly looks to be a key component for such interventions, along with Facebook’s grip on digital attention spans.

On this, Frydenberg’s articles cites a report by the country’s competition commission which found more than 98% of online searches on mobile devices in Australia are with Google. While Facebook was found to have some 17 million local users who connected to its platform for at least half an hour a day. (Australia’s total population is around 25 million.)

“For every $100 spent by advertisers in Australia on online advertising, excluding classifieds, $47 goes to Google, $24 to Facebook and $29 to other participants,” Frydenberg also wrote, noting that the local online ad market is worth around $9 billion per year — growing more than 8x since 2005.

We’re disappointed by the Government’s announcement, especially as we’ve worked hard to meet their agreed deadline. COVID-19 has impacted every business and industry across the country, including publishers, which is why we announced a new, global investment to support news organisations at a time when advertising revenue is declining. We believe that strong innovation and more transparency around the distribution of news content is critical to building a sustainable news ecosystem. We’ve invested millions of dollars locally to support Australian publishers through content arrangements, partnerships and training for the industry and hope the code will protect the interests of millions of Australians and small businesses that use our services every day.

If enough countries pursue a competition-flavored legislative fix against Google and Facebook to try to extract rents for media publishers it may be more difficult for them to dodge some form of payment for reusing news content. Though the adtech giants still hold other levers they could pull to increase their charges on publishers.

Indeed, their duel role — involved in both the distribution, discovery and monetization of online content and ads, controlling massive ad networks as well as applying algorithms to create content hierarchies to service ads alongside — has attracted additional antitrust scrutiny in certain markets.

After launching a market study of Google and Facebook’s ad platforms last July, the U.K.’s Competition and Markets Authority (CMA) raised concerns in an interim report in December — kicking off a consultation on a range of potential inventions from breaking up the platform giants to limiting their ability to set self-serving defaults and enforcing data sharing and/or feature interoperability to help rivals compete.

Per its initial findings, the CMA said there were “reasonable grounds” for suspecting serious impediments to competition in the online platforms and digital advertising market. However the regulator has so far favored making recommendations to government, to feed a planned “comprehensive regulatory framework” to govern the behavior of online platforms, rather than taking it upon itself to intervene directly.

Universal Pictures’ Trolls World Tour Was a Light-Hearted Kids Film, But It’s Causing Drama Between the Studio and Movie Theaters

Quibi is the anti-TikTok (that’s a bad thing)