Bookshlf has created a new way for people to recommend media — whether it’s music, videos, articles, podcasts or even tweets — to their friends and to the rest of the world.

The New York-based startup is officially launching its web and iOS app this week and announcing that David A. Steinberg, co-founder and CEO of marketing company Zeta Global, has signed on as both an investor and advisor.

The big emphasis here is curation. It’s a word that comes up a lot in the media industry, but President Andrew Boggs — who previously worked in business development at Zeta, then founded Bookshlf with Mike Abend and Justin Cadelago — argued that the major internet platforms aren’t actually designed for real curation.

“A lot of the legacy platforms have focused on quantity over quality,” Boggs said. “There’s also the nature of things being really fleeting there … For example, if you are sharing stuff about music, I have to sift through your feed to find that information.” 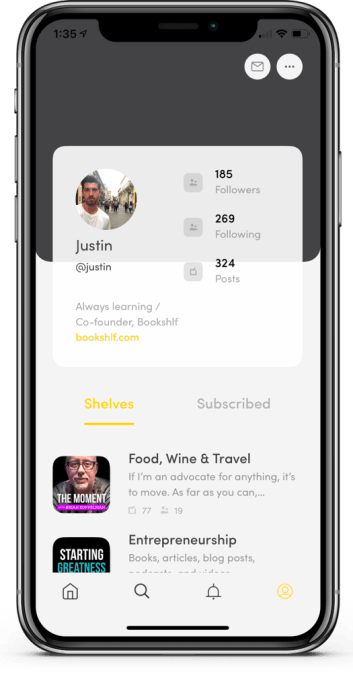 It sounds like this idea resonated with Steinberg, who argued, “The big social media platforms do not make a living by building small groups of very interesting people. They think, ‘How do we get as much volume as possible?’”

In Bookshlf, on the other hand, users can organize their recommendations into different “shelves” based on topic, and then easily add links using the iOS Share menu (or by just adding them directly in the app). You can also share links to your shelves via social media.

Boggs, for example, has shelves tied to topics like electronic music, humor, tech/media news and even the best burgers in New York. Steinberg, meanwhile, said, “I don’t believe people primarily go to Facebook or Instagram to consume business information,” so it’s not surprising his shelves are focused on artificial intelligence, DARPA and Zeta itself.

The paradigm of a shelf of content might seem a little quaint — Boggs compared it to the shelves of DVDs or albums that you might have shown off in the past. But in his view, the model makes sense for these kinds of recommendations, because it allows people to focus on what they’re actually interested in: “Because the shelves are a curated selection, you can jump to your profile, and if you have a music shelf, I can jump right into that.”

While it remains to be seen how people will actually use Bookshlf, Boggs said there’s a likely to be a minority of core users who are doing the most active curation and sharing. These are the kinds of people who are probably already doing a lot of sharing — whether that’s on social media or just over a group chat — and “love to send you interesting articles and interesting podcasts.” At the same time, other users will simply browse the app for interesting recommendations, and they can also use the shelves to save links for themselves.

It sounds like the Bookshlf team isn’t focused on monetization yet, but Boggs suggested that there are a number of interesting opportunities, including targeted advertising, sponsored shelves, micropayments for content and selling data about broader trends in the audience interest.

In addition to Steinberg, Bookshlf has raised an undisclosed amount of funding from CAIVIS Acquisition Corp, Dalton Partners and Cambridge Way Ventures.